Radical Candor: read the fine print before use 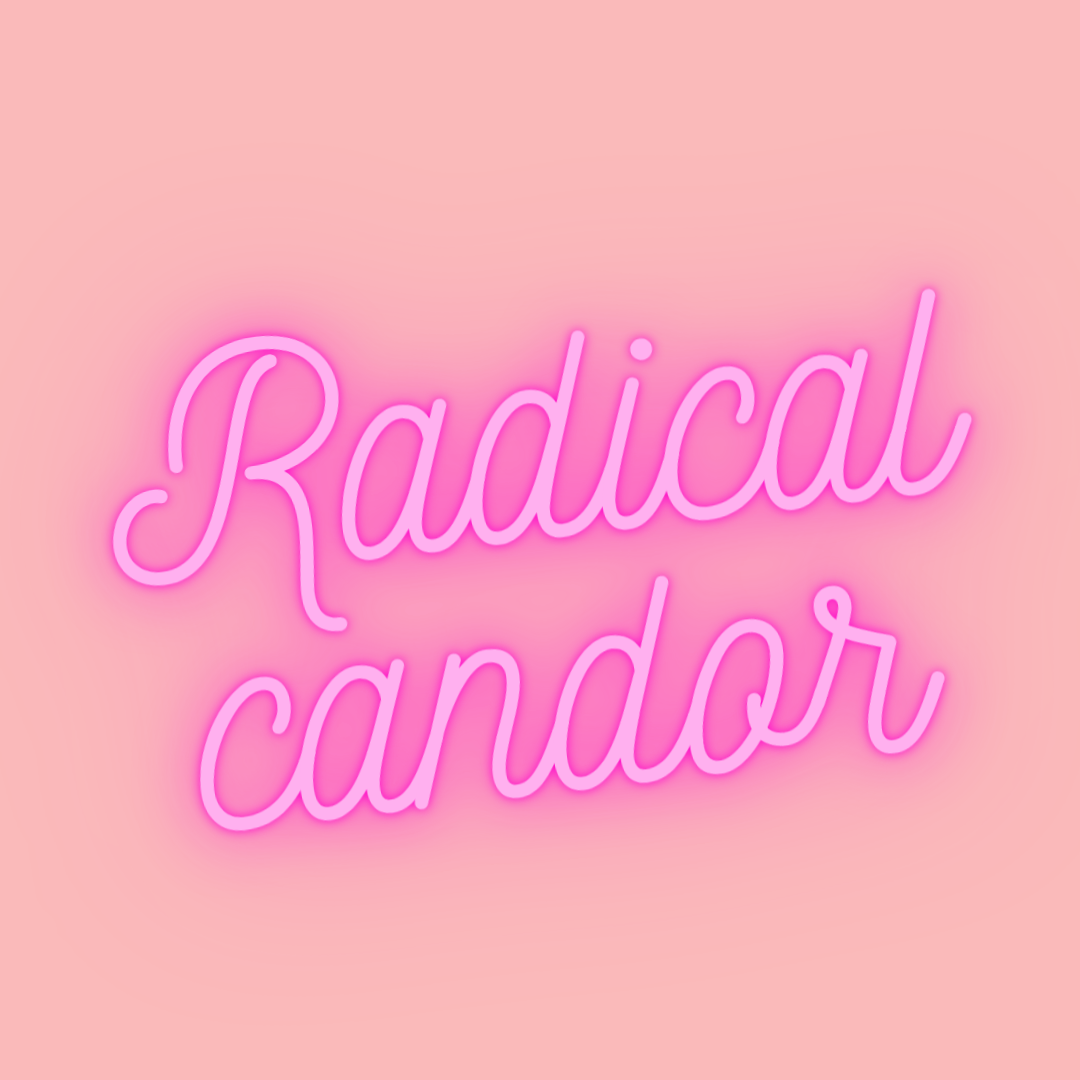 A brief introduction for those of you who don't know the words “Radical Candor” in the title:  in 2017, Kim Scott, an erstwhile executive working with high-profile Silicon Valley tech companies like Google, Dropbox and Twitter, came up with a new way of giving feedback, aka Radical Candor. In a sentence, this philosophy is based on caring personally while challenging directly. She has a book, a dedicated website, and since 2017 a company called Radical Candor, so needless to say if you are looking for more information, you will not be looking for too long. But this article is not a homage to this author, nor is it a critique of the philosophy that is Radical Candor, instead it aims to explain how people by nature are flawed individuals and are well-known historically to “ruin a good thing”.

My friend A once told me about an instance where her former boss decided to completely blame her for something that an entire team worked on and in general explain away unprofessional behaviour and basic rudeness with “Radical Candor”. This got me thinking, can we really trust professionals to learn the what’s and how to’s of such management philosophies before using them and not misinterpret them by just taking them literally?

Among the literate population of the world, there is no concrete data around how many people above 15 years of age actually read a book for purposes other than academic. But let’s for fun apply the famous 80/20 rule, that is ​​20% of the people do about 80% of the reading. Add to that reading a dull drab management book such as this, the percentage of people will reduce even further. This means very few people in the world probably read Kim Scott’s famous book, so the chances are probably high that the people preaching this way of giving feedback haven't really invested the time or effort to read through what it actually means.

Since then, A has however invested her time finding out about what Radical Candor is and probably unlike her manager, read the book cover to cover.

Call it plain curiosity or sisterly solidarity, so did I and here’s what I think :

Scott illustrates her moment of epiphany by detailing a conversation she had with Sheryl Sandberg, after Sandberg, then with Google, had watched Scott present something to Google’s founders. Although the presentation went well and Sandberg was full of praise for Scott’s knowledge, she suggested they take a walk. This is the conversation they had on the walk:

“Yeah,” I replied. “I know I say that too much.” Surely she couldn’t be taking this little walk with me just to talk about the “um” thing. Who cared if I said “um” when I had a tiger by the tail?

“Was it because you were nervous? Would you like me to recommend a speech coach for you? Google will pay for it.”

“I didn’t feel nervous,” I said, making a brushing-off gesture with my hand as though I were shooing a bug away. “Just a verbal tic, I guess.”

“There’s no reason to let a small thing like a verbal tic trip you up.”

“I know.” I made another shoo-fly gesture with my hand.

Sheryl laughed. “When you do that thing with your hand, I feel like you’re ignoring what I’m telling you. I can see I am going to have to be really, really direct to get through to you. You are one of the smartest people I know, but saying ‘um’ so much makes you sound stupid.”

Now that got my attention.

Sheryl repeated her offer to help. “The good news is a speaking coach can really help with the ‘um’ thing. I know somebody who would be great. You can definitely fix this.”

She continues to say that, to someone else this might have sounded rude but to her this sounded like very good advice and she felt it came from a place of care and support. She ultimately took the offer of a speech coach and coined the term we are talking about today.

Feedback requires a certain amount of trust between the giver and receiver. You need to trust your manager to have your success and betterment in mind and to truly understand you when they give you certain feedback. To do that you should also unequivocally trust that your manager is fair and empathetic towards you. If, as a manager, you give feedback to somebody without truly understanding that person or the situation, then your feedback is based entirely on your own judgment and therefore subjective. This is of vital importance when the feedback is given with “Radical Candor”, that is might come off as rude or mean when that trust is missing. And honestly it is great that there was so much trust between these two smart and successful leaders, namely Scott and Sandberg, but it is not often the case. A person in a leadership position often holds a lot of professional power over those they lead and we are not all fortunate to be blessed with great leaders or managers. More often than not they are flawed individuals who can get by with being plain mean and unpleasant and justifying it using catch phrases such as “Radical Candor”.

Not all leaders are white, male

Or if not presenting as male, have the so-called traits of an “alpha-male”, especially in a North American cultural context. Scott's book has a serious whiff of the Silicon Valley bro culture where leaders are assertive and self-confident and are always right with just a slight twist of the “caring personally” dimension. This is not surprising given that Scott has majorly worked in Silicon Valley companies famous for having white, male North American leaders. In fact, both Sandberg and Scott have had to navigate and excel in these predominantly “alpha-male” environments, which is nothing short of outstanding but the assumption that this hyper self-confident assertive role is the only way forward is simply not true.

This philosophy of giving feedback assumes that it will be received similarly by everyone. Which is just not the case. If supporting a neurodiverse workforce is an issue that companies are failing at in 2022, it’s not naive to assume that it was even more of an issue in 2017 when this philosophy came into being. Plenty of neurotypical managers are not equipped with the skills and nuances needed to understand and communicate effectively with their neurodiverse employees, so what happens when such a manager uses mass product philosophies with all neurotypes? Needless to say, this has a huge potential of creating anxiety and stress for neurodiverse employees.

Especially when selling a mass market “management mantra” such as this, internationally. While researching how feedback is handled across the globe, I came across this very interesting article in the Harvard Business Review outlining how feedback is even given differently across cultures. This is not surprising, especially if you’ve ever worked in multiple countries or with people from different cultural or geographical backgrounds than yours. Speaking from personal experience, the way I was given feedback in my country of origin, India, where I began my career is completely different from the way my feedback meetings go in my current country of residence and work, Germany. More casual and diplomatic in India to more direct and structured in Germany. The understanding of power dynamics is completely different in different cultures. In certain parts of the world, leaders are revered, respected and even feared. Employees in some cultures expect a gentler feedback and positive reinforcements, rather than pure critique, while this type of indirect feedback might confuse someone from another country or culture. How then can we sell one way of giving feedback as a better system internationally?

Not everyone wants to be a manager

For every Steve Jobs, there is also a Steve Wozniak. This is my ultimate issue with the “Radical Candor” philosophy. Not everyone wishes to lead, some people just want to build and create, and work in a collaborative environment. “Radical Candor” is marketed as a feedback philosophy not just for managers, but one that can be used by everybody, but as discussed above it is focused on a certain personality type, the assertive self-confident one that does not shy away from direct radical feedback. But it fails to cater to the other types of personalities, the ones who aren’t in-your-face assertive, the ones who are willing to step in and help but equally willing to step back and let somebody else take over. The ones who can give up power, who are able to admit to mistakes or accept that they are wrong.

It is an organisational leader’s responsibility to ensure that ideas are being aired and people feel psychologically safe to voice their opinions and not shy away from expressing them for fear of being ridiculed or reprimanded, maybe because they use the word “Um” too much. All this is not to say that ‘Radical Candor’ as a feedback philosophy does not work at all and should be thrown out of the window, instead that like everything else, it comes with its own sets of flaws and should be taken up as such, with a big disclaimer.
Therefore my advice to anyone reading this would be, to do what my friend A does. When confronted with “Radical Candor” in your profession, question the need, challenge the feedback giver’s understanding of the philosophy, be aware of its many failings and learn to identify rude and unpleasant behaviour from feedback genuinely given to help you.
And remember, you can choose to set boundaries around how you receive feedback.